HOW TO convert incandescent lights to led lights

Many people are replacing the incandescent lighting on their trailers with LED lighting these days. As the prices of LED lights come down, you are seeing them more & more. So why is everyone switching over to LED? 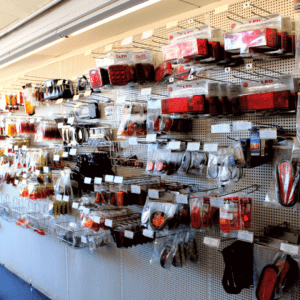 – Draw a fraction of the amperage that incandescent lights draw

– Operate at a cooler temperature

– Some LED’s are offered in voltage operating ranges (Manufacturers of these lights state that some lights operate from 9v – 32v or 10v – 30v, depending on the manufacturer) (Ideal for people using 12v & 24v vehicles). (In these cases the lights on the trailer will operate regardless of whether the vehicle is putting out 12v or 24v).

Replacing the lights on your trailer with LED lights isn’t a difficult task. You can buy replacement LED lights in a kit or each light individually. To simplify the task, purchase LED lights with the same mounting style as your existing incandescent lights. You can also take this opportunity to change to different style lights. Just remember to adhere to DOT lighting requirements & keep in mind that different mounting styles may require some extra drilling, cutting, etc.

Some LED lights may be hard-wired, while others may require a pigtail plug that is typically different than ones used on incandescent lights. Hardwired lights can be wired directly to the wiring on your trailer. If your trailer wiring harness directly accepts plug in light harnesses, there are LED adapter plugs to adapt from the LED plug on the back of the light to what your incandescent light plug harness.

The ideal scenario would be removing the incandescent lights, installing & wiring the replacement LED lights, connecting the trailer & having everything work perfectly, but sometimes that is not the case.

Some vehicles feature a lamp out sensor, which causes the turn signal to hyper flash on the trailer. The low draw of the LED light tricks the vehicle into thinking that the lamp is not working. This can be fixed by using an LED lamp out bypass adapter. You can also install an LED bulb load resistor on the tow vehicle. One resistor is required for each LED turn signal. Also since the resistor is on the tow vehicle, if you use multiple vehicles to haul your trailer that could cause an issue.

Shop all of our lighting here!